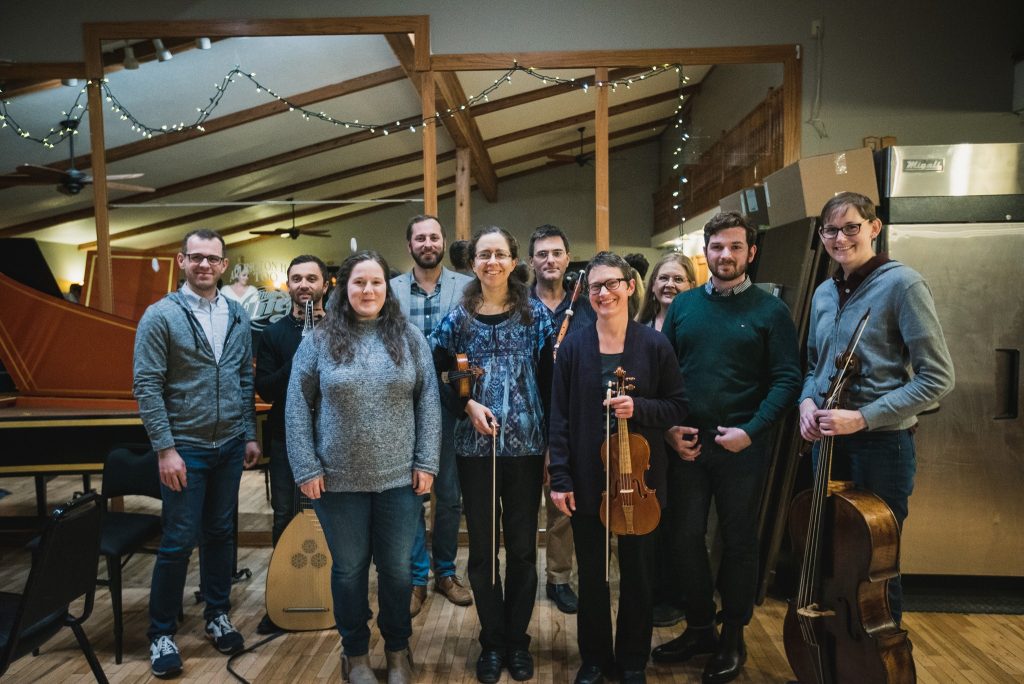 La Grande Bande strives to present innovative, unique and inspiring musical programs right in the heart of southern-Minnesota farm country. With performances called “warm and sensitive” by the Star Tribune, we seek to reintroduce classical music to our communities using the instruments and techniques premiere audiences might have heard. LGB is composed of musicians from across the United States and from around the world who are specialists in the field of Early Music—music written between c. 1600-1800—and who play on historical instruments and sing in an historical manner.

Our goals are to present “masterworks” alongside lesser-known compositions, illustrating the extensive musical production during the sixteenth, seventeenth, and eighteenth centuries; to foster musical growth in the younger generations through directed-educational events, open rehearsal sessions, or masterclasses; to reinvigorate the older generations with outreach concerts, pre-concert talks, open rehearsals, and beyond. We see incredible value in resurrecting the music written by the great masters of our past; it’s a historical, cultural, and musical lesson rolled into one.

La Grande Bande is a period instrument orchestra and chorus founded as a non-profit organization by Michael Thomas Asmus in 2011.

What’s with the name?

Our Founder/Music & Artistic Director loves history, food, and most importantly, the French. For decades, France was one the most powerful countries in Europe. Using the Arts – paintings, theatres, operas, orchestras, musicians – was one way a European court could flaunt its prestige. Having the best orchestra, the most renowned virtuoso musicians, or the best composers in the service of the King or Queen was considered a mark of excellence for the monarch and his Court. Much of the music we perform is due, in large part, to the patronage of the various European Courts. For without them, it’s reasonable to believe much of it would not have been written.

The ensemble’s name has its origins in the French Court’s Les Vingt-Quatre Violons du Roi (Fr. “24 Violins of the King”), a select group of 24 musicians who worked in the French Court during the 17th and 18th centuries. The ensemble was made up of five string parts all played on instruments from the violin-family: 6 violins, 12 violas (4 per part), and 6 bass violins (similar in size to the violoncello).

The group was officially recognized by Louis XIII in 1626 and was frequently referred to as the Grande Bande. Often reinforced by 12 wind instruments (the Grands Hautbois), the 24 Violons could claim to be Europe’s first regular orchestra. According to French custom there were five string parts: six first violins (dessus), four each of the three middle parts (haute-contre, taille, quinte), and six basses (bass violins). In 1656 Lully founded a smaller and even more select band of 16 string players, the Petits Violons or Petite Bande. (The Oxford Companion to Music.)

If a large ensemble was needed for a ceremonial occasion (weddings, coronations, etc.), they likely combined La Grande Bande with La Petite Bande and the Grands Hautbois. But for a particularly Grand affair, members of the military (trumpets, horns, drums) could have also joined the enlarged ensemble, adding further elements of ceremony and pageantry.